It has been raining here. Yesterday the effects of endless sky-fall were clearly manifest.

As I was out driving I came to a badly flooded road. I could see what looked like tow trucks with amber lights flashing on either side of the water, and locals were gathered around, watching the scene. A girl waded through, clutching a tiny, yapping dog in a bag. I couldn’t tell how deep it was, but the trucks were driving back and forth through it, and a couple cars ahead of me sped through too. Immediately in front of me, the decidedly smaller car did a quick turn and sped off in the other direction. At that point I should’ve remembered that I was about the same size and turned around too. But no, of course I thought, ‘I can make it! Driving through water – what an adventure!’

I edged forward and accelerated slowly. It was all going fine for a while. The tyres cut through the water with ease. I felt like a swan, gliding onto a lake. It was a picturesque moment – sailing in my car! Until I got to the middle when my car did the inevitable and sighed to a halt. All became quiet. No alarms sounded. No one rushed to pull me out. Two men pointed and chuckled as they drove straight past me. Another couple standing on the far side looked pitiful for a while, then turned and walked away. Larger cars and trucks continued to stream past, churning up huge waves that gently lifted my car up and bobbed it from side to side. 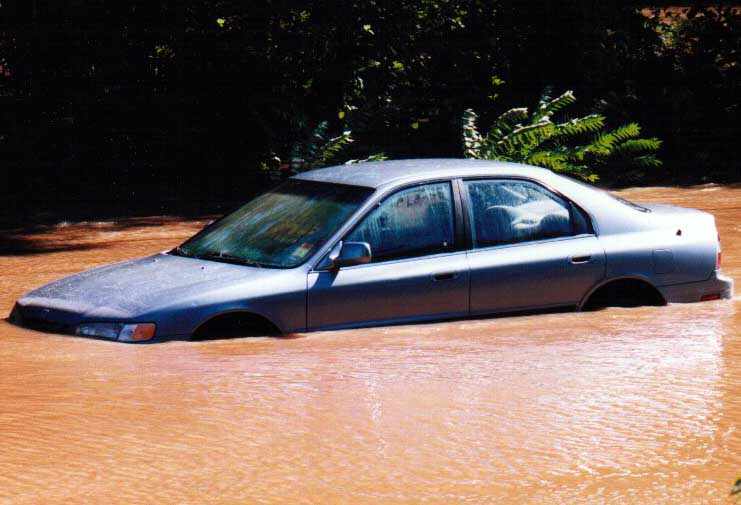 Were it not such a ridiculous situation, it would’ve been quite beautiful. The sun had begun to set over the flooded fields, colouring the vast stretches of water deep pink. The waves lapped the car doors. Birds chirped their evening songs. But my feet felt wet. I looked at the floor – at least three inches of water had seeped in.

This morning I thought about what I could learn from what happened. There is the obvious: don’t drive through water unless your life depends on it. I remembered the famous song, ‘Wade In The Water’. Some say the lyrics recall the bravery and faith of black slaves, trying to cross the Mississippi River to escape their life of captivity. Many lives were lost to the river’s strong current, but they continued to use it as a means of escape, shaking off those who would pursue them on dry land. Now that’s a reason to cross a river.

In the bhakti tradition, our journey through life is compared to the crossing of a great body of water. With no boat or raft, it is a treacherous situation. We are swept and smashed by the waves of life, death, love and loss. But bhakti yogis trust the assurance of the Bhagavata Purana, that by taking sincere shelter of God, the vast ocean shrinks to the size of a calf’s hoof print.

Last night the tow guy lectured me. He’d already pulled out twenty other cars in one day who had attempted the same. ‘You couldda got through, right,’ he said. ‘What ya had to do is drive right up the behind of one of them trucks. They make a bow wave that pushes all the water to the sides.’ 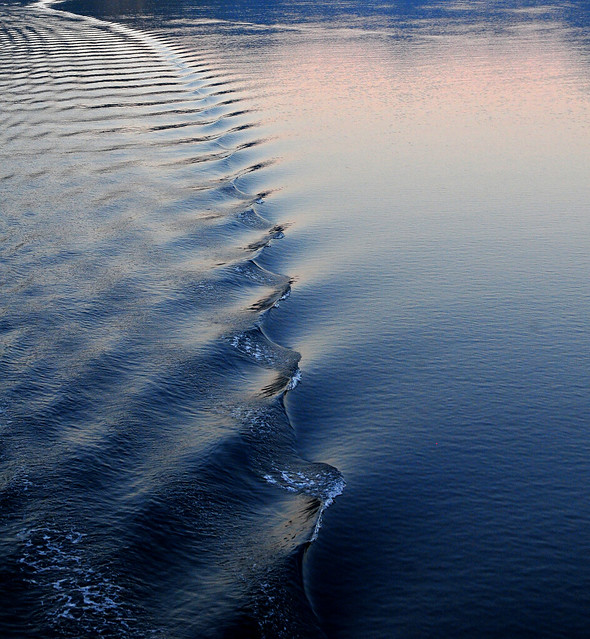 That was my second lesson. Crossing a river should always be done by walking in the bow wave of a great master. It’s no use trying to have an Indiana Jones moment and dive in if you’re just going to glug to a halt in the middle. Take heed of the advice, the signs, the great teachings, the words of the saints that carve through puddles and pools. Observe the amber flashing lights and the actions of those in front of you.

This wannabe heroine is humbled.