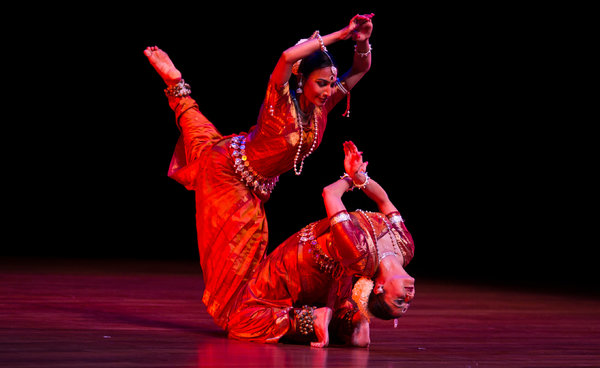 A moment in ‘Vibhakta’ – image courtesy of the New York Times

Most writer types take pride in always having the right words on hand to describe their experiences. It’s a matter of pride. Well, I took my fall the other night when I watched the two principal dancers of Nrityagram perform, as part of the Southbank Centre’s Alchemy festival. I have watched Odissi dance many times before – well, at least I thought I had. This performance well and truly rendered me lost for words.

Despite careers spanning more than two decades, and scores of performances internationally, Bijayini Satpathy and Surupa Sen have never danced on a London stage before. As co-directors of one of the last remaining traditional dance gurukulas in the world, they are renowned for their absolute dedication to excellence in their artform.

The evening was made up of a mixed bill of duets and solos – all the better for appreciating both their dynamism in tandem, as well as their individual brilliance. They began with the duet ‘Namo Narayana’ an energy filled piece that served as an invocation. The lyrics by South Indian saint-poet Annamacharya have been danced for centuries in the Bharatanatyam repertoire, but here they were absolutely reimagined with creative staging and immaculate timing, whilst Odissi’s signature S-bends, curves and subtle lilt were brought to life with both power and grace.

The next piece showcased the nritta or abstract aspect of the dance form. For contemporary audiences, these pieces are usually the crowd pleasers – requiring zero understanding of Hindu epics or the elaborate language of mime. Nevertheless, they can become predictable and formulaic once an observer is familiar with the dance vocabulary. Not the case here. Surupa Sen’s choreography defied anything I thought I knew about Odissi, incorporating leaps, unusual bends and a thrilling pace – even a pigeon walk!

The next two pieces were solos, drawn from the famous Gita Govinda poem, upon which a large portion of Odissi repertoire is based. In the first, Sen danced as Sri Radha, ablaze with anger that she has been cheated by her beloved, Sri Krishna. In the second, Satpathy took to the stage as Krishna, trying to win her affection again, with charming words and smiles. Both excelled in their ability to communicate both their own character’s emotion, as well as that of their beloved. In gesture and glance, one could almost hear the conversation taking place, and see the invisible Krishna, as he tried to grab Radha’s hand for one last time, or Radha, as she finally rests her head on his shoulder once again.

The last piece of the evening – Vibhakta, saw the union in dance of Lord Shiva, and his feminine counterpart, Parvati. Time stood still. The piece perhaps perfectly showcased their breathtaking synchronisation and harmony after dancing together for 22 years.  It was a near transcendent finale to an extraordinary performance.

After the show, Satpathy and Sen were interviewed on stage. With reserve and eloquence, they spoke about the unique project that is Nrityagram, and their inspiration to dance. ‘We just dance, that’s all we do, otherwise we are really quite boring,” smiled Sen. They batted away elaborate questions about creative process and updating Odissi for the contemporary context, stating that in the 5-8 hours a day spent in research, choreography and practice, “We just do what we love, and what we think is beautiful…we don’t really think about it as trying to be innovative or contemporary.”

As a ‘jack of all trades’ creative type, I was deeply touched by their evident devotion to one artform, honed to a high level of refinement through long hours and genuine love. In today’s Inst-grat world, it is becoming ever rare to encounter artists who have taken the time to go so deep. To hear and see them, was a rare delight that touched my heart, and reminded me that wonderful things require time, effort and unshakable commitment – a lesson I think they embody, beyond the beauty of their dance.